Danceintothelight Looks the Best Bet at Sedgefield on Friday

Sedgefield host a six race card on Friday afternoon and on that card, the best bet of the day comes in the first race of the day in the form of Danceintothelight. The Donald McCain trained 12 year old has been knocking on the door recently, and he looks well handicapped enough to pick up a win here in what looks to be a very run of the mill handicap. He has won over course and distance before, and was beaten by a fair handicapped horse last time out, this looks to be the day he gets revenge and lands his first win since August 2017, which came at this course.

Although that win was 18 months ago, it came off a mark of 109, and since then we have seen this horse run well off marks in the 110’s. Today he runs off just 100 after dropping down in the weights and being given a chance by the handicapper and I think he is going to take advantage of that.

He was sent off as the favorite last time out at Catterick but could only manage second behind Rockliffe, a horse who like Danceintothelight, was handicapped to go very close. What was impressive that day is that Danceintothelight was 12 lengths ahead of the horse in third, and ran a really promising race. Earlier in the season, the horse ran well off marks higher than this and he looks to have a great chance here.

The top three in the weights appear to have this race between them and the Keith Dalgleish trained Best To Come is quite aptly named as I think his best is yet to come and we will see it shortly. He finished second on stable debut over course and distance and was only beaten by a length. Unfortunately he has been put up a couple of pounds for that, and that could well be enough to stop him here, although I do think the yard will find a suitable opportunity in the near future.

Hear The Chimes is the other horse of note, and he comes here after a mini break due to a wind operation. Before that, he won over course and distance on his final start, winning by just under two lengths off a mark of 92. Today he comes back on a mark of 99 and based on some old form that is still a workable mark for this horse, and he is another to keep an eye on in the future. However, the small break he comes off may just be enough to prevent him from winning this one, and that is why he is passed over.

This looks to be a decent race and three horses appear to hold the race between them. Two of the challengers have slight question marks over them, and that is enough to give Danceintothelight the upper hand and the chance to pick up a deserved succes. He looks well handicapped and he can make that count in the opener at Sedgefield on Friday. 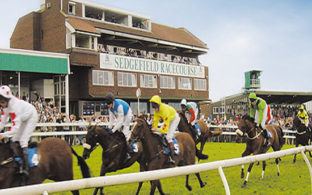