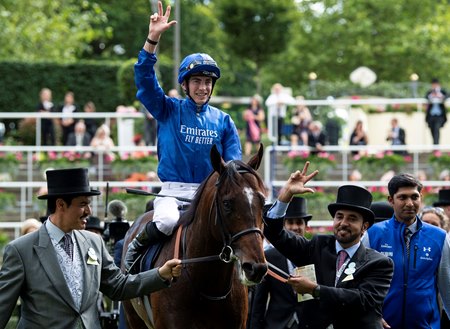 Last week was the best in the career for Blue Point, and now this week he has been retired to stud as he moves onto the next phase of his life. The Godolphin sprinter won twice at Royal Ascot, landing the 5f King Stand on Tuesday before winning the 6f Golden Jubilee on Wednesday. He will now stand at stud and begin his career as a stallion, with the Godolphin team hoping that he can produce them some Group One winners in the future.

As a five year old, it is the right time for him to be retiring although it is a little surprise to see him retire part way through a season. However, the team are clearly looking at the bigger picture here, knowing that they can get him covering females straight away instead of running until the end of the season and them having to wait until this time next year.

If there is one thing that Godolphin don’t have then it is a sprinting stallion to use if they are looking to breed sprinters of the future. There are not too many of these about, and if Blue Point can translate his form on the track to his offspring then he is going to be in high demand in the breeding barn.

He now has three total Royal Ascot wins to his name, with a win in the King Stand last season going alongside his two wins this season. Those who like to see horses run will no doubt be unhappy about this, especially coming just days after seeing the horse completely dominate the sprinting division. However, the future for the horse looks bright, and if he can cover some top quality females in his first year, he could well command a big price in the future.