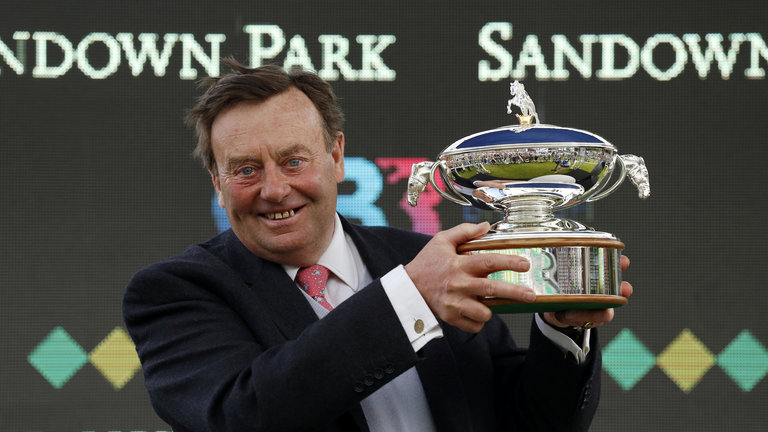 Nicky Henderson has a big string of horses that he is preparing for the Cheltenham Festival, and some of those horses participated in a racecourse gallop at Kempton racecourse earlier today. Overall, Henderson was pleased with the runner, and in particular he signalled out a couple of them for special praise.

With the disruption to racing due to the equine flu outbreak, many trainers have changed their plans ahead of the festival, and now they are having to do what they can to get their horses as fit and ready as they can be for the big week, which is now just two weeks away.

Henderson took a total of 12 runners to Kempton, splitting them into four lots of three horses, with Daryl Jacob, Nico de Boinville and Aidan Coleman there to ride the runners.

Stable stars Altior and Might Bite were among the runners, with Triumph Hurdle hope Adjali, National Hunt Chase horse OK Corral and exciting novice Champ all joining them on the track.

In the first lot, Adjali was the horse to impress Henderson the most, coming away from horses to finish ahead. He beat Countister, a horse who will head to the County Hurdle at the festival and one that has reportedly been working well at home, so for Adjali to come away from him, shows just how impressive he was.

Adjali is as big as 25/1 for the Triumph Hurdle and after Fusil Raffles was ruled out yesterday, who has the same owners, they will be hoping Adjali can compete well for them in the race.

Of those running in the second lot, OK Corral was the most impressive, and Aidan Coleman jumped off him and said he was delighted with the work shown. They went quicker than the first lot, and that is despite this horse being a very strong stayer. He heads to Cheltenham for the four miler and will only improve the further he goes, he looks to be a nice horse in the making and this work was very good.

In the third lot we saw Might Bite on the track, and he narrowly won the gallop in what was described as a quick pace for three milers. He is no doubt a classy animal, and has finished second in a Gold Cup before. He has had problems this season, but the yard have been treating him for ulcers and they have seen an improvement in him since changing his medication for those recently, so they are hopeful we will see him somewhere near his best once again.

In the final lot, Altior came away nicely to finish three or four lengths clear of Theinval and River Wylde, setting him up nicely to go to the festival and retain his Champion Chase crown. He is a very talented runner, and has great speed which is exactly what we saw in this gallop as he came away from two good horses.

After the gallop and his recent form, Altior is already as short as 4/9 to win the Champion Chase for a second time, and already the opposition to him are running scared and looking at alternative races.

At the end of the session, Nicky Henderson said he was very pleased with how things went with all four lots, but piled special praise on Adjali and Might Bite. Those two are at complete opposite ends of their careers, but both impressed today and both appear to have solid claims going into the Cheltenham Festival, which is now just two weeks away.